“I Read the Face of Elon Musk, and I Can Tell You Why He Is Mr. Musk”: Elon’s ears are large in size. This reveals that he is a really good listener and is always ready to hear more. He takes things in methodically and logically and also prefers wisdom over speed. Because of this tendency, it’s most important to communicate with him thoughtfully and slowly, and not bombard him with hurried explanations. His ears also have a pronounced inner ear ridge, which indicates that he doesn’t take things literally—instead, he captures the tone and context of a situation. He even relies on his gut when making decisions. The most important feature related to Elon’s ears, however, are the small vertical lines that lie in front of them. These lines actually called “lie detector lines” in Chinese face reading, reveal his ability to spot a lie or inauthenticity from a mile away. It is of utmost importance when communicating with him that you are honest at all times.

His eyes actually reveal how he is likely to respond. He has very pronounced eye puffs over his upper eyelids. These signify that he is so focused on externals that he has let his own needs fall by the wayside. In other words, his life is so focused on achieving goals and working hard that he doesn’t take good care of himself or let himself have any downtime. Because of this, he can be impatient or overly critical with people. It’s not uncommon for CEOs to have this feature and to, in turn, be quite bristly. Interestingly, however, Elon also has thin eyelashes, which reveal that he, himself, is overly sensitive and may get his feelings hurt easily. In other words, he can dish it out, but he can’t take it. Further amplifying this, Elon also has small irises, which signify that he is indeed very sensitive. In fact, he can’t stand it when people shout or when his environment is intense. He is so sensitive that he almost doesn’t want to feel things because it’s so overwhelming for him. Another interesting feature to Elon’s eyes are the hooked inner canthuses (the inner corners of the eyes), which signify that he uses precision when communicating with words, and when angered can actually use words as weapons. Lastly, Elon has small reflective points at the inner corners of his eyes, which are called prescient points and which mean that he is gifted with intuitiveness. He knows things that others don’t, and he doesn’t know how he knows them. Elon’s eyebrows reveal just as much information about him. Firstly, his eyebrows are highly placed above his eyes. This signifies that he is selective and discerning by nature and also likes to take his time when making decisions. He wants to make sure that something feels right before moving ahead with it, and feelings can’t be rushed. Therefore, he also dislikes being rushed in his decision-making. His eyebrows are straight in shape, indicating that he values a direct and factual manner in communications and processes things analytically. He also respects proven leaders in a field and feels that given a manual, he could solve any problem. Elon’s eyebrows are tangled—in other words, the hairs grow tangled together, which signifies that he likes to play devil’s advocate and has a tendency to challenge other people’s opinions. Be certain that you know the topic that you are presenting to him inside and out, because he will ask that you defend your position. Lastly, the space between Elon’s eyebrows is very wide, which signifies that he has incredible innate self-will. If he’s going after something, he is going to get it.

Mr. Musk’s high nose ridge reveals that he prefers to work alone, as he feels it is most efficient. Amplifying this is the fact that he has a thin nose base. The thinness of one’s nose indicates how self-reliant and self-sufficient one is. Because of this, when someone offers to help him, he usually refuses. However, the nasal feature that is most revealing on Mr. Musk is that his septum hangs lower than his nostrils. This indicates that he finds professional fulfillment in jobs that help others. In other words, he wants to be of service.

Elon’s wide face signifies that he has innate self-confidence and doesn’t think twice about things that others with narrower faces would balk at. Things are typically no big deal for him. On the lower portions of his cheeks, he has deep vertical lines that indicate that he is very supportive of people in general. He actually feels empowered by making other people feel good about themselves, and because of this, he is a very good consensus-builder.

Mr. Musk’s mouth lays straight across, revealing that he responds objectively to what he hears. He isn’t one to color situations either pessimistically or optimistically, and because of this, he is a good sounding board for people. Elon’s lower lip is fuller than his upper lip, indicating that he prefers to talk about external events rather than reveal what his inner feelings are. In other words, he is most comfortable in conversations where he doesn’t need to express his emotions. Additionally, and interestingly, this feature also indicates that he likes to indulge in things and be pampered. Above his upper lip, he has two narrowly spaced ridges, which indicate that he tends to divide the world according to gender. He actually gives a higher standard to his own gender—men—and he may be the type of person to say that someone did something because she was a woman and vice versa. The last notable feature about Elon’s mouth is that he has a gummy smile. This reveals that he is innately a giver and not a taker.

Elon’s big chin indicates that he is naturally assertive and competitive and can easily bounce back from physical setbacks. His big chin also broadcasts that he is fearless. Rounded in shape, his chin reveals that his actions are people-focused. He has a genuine concern for others and shows it in his actions. There is a horizontal line across Mr. Musk’s chin that signifies that he is an over-achiever. He shoots for the stars in the hopes that people notice his accomplishments. However, this feature also signifies that he needs unconditional support when the chips are down. Elon’s chin has small dimples on it, which signify that he expects to meet with adversity on a daily basis and so he symbolically prepares for battle each day. He’s ready for a challenge at all times. Elon also has lines at the outer sections of his chin that indicate that he is a natural talker.

Lastly, Elon has wide, well-developed jaws that reveal that he is very tenacious in his beliefs and has great fortitude and commitment to his ideals.

What are the major themes that one can expect when interacting with Elon Musk? Well, one of the first things to focus on in successful communication with him is to make sure that what you are telling him is true and well thought-out. He’ll know if you are lying, and he will also not be afraid to challenge whatever it is that you are discussing. He wants the facts, and he wants them fully talked out and explained.

Aside from relying on lengthy explanations, Mr. Musk also trusts his gut and his feelings, as is relayed in multiple features on his face. Because he relies on non-tangibles, he tends to stall when making decisions. In fact, he may often use the phrase “let’s wait and see.” During your time with him, make sure that you don’t “rush” him into making a decision he doesn’t feel good about. And also, don’t be surprised if he mentions things that he could not possibly have known—he is rather intuitive.

Knowing how to approach Elon is valuable; however, knowing how he will tend to react is invaluable. He has the signs on his face of being sensitive, reactive, and critical. It is important to remember that so as not to take things personally. Also, it is of paramount importance not to raise your voice around him. If you do so, he will shut you out.

Luckily, coupled with Mr. Musk’s reactivity and extreme sensitivity, he also exhibits several features that indicate he truly cares about people. If you position whatever it is you are discussing in such a way as to make it seem that your work helps people, it will likely strike a chord with him.

It is best to realize when dealing with Mr. Musk that he is a formidable adversary who enjoys healthy competition and doesn’t back down easily. He will also often challenge you. But, interestingly, he’s not all toughness and aggressiveness. He likes to be pampered and indulges in things (food, drink, etc.). That is the way to break through to him.

The 10 Rules for Success by Elon Musk 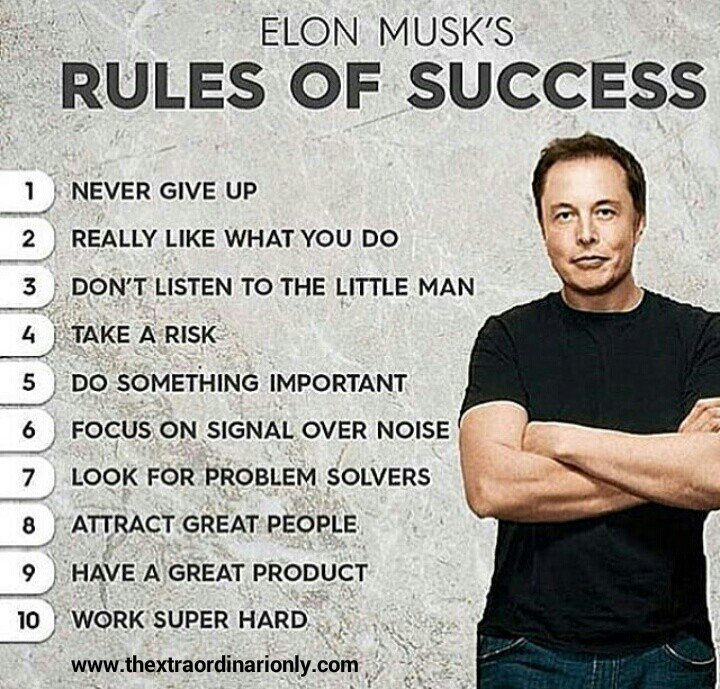